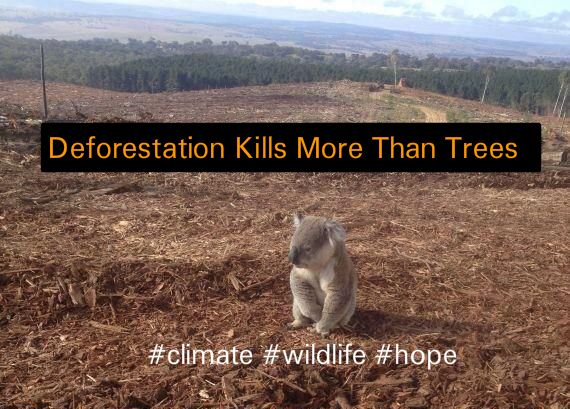 The koala is considered a threatened species in three parts of Australia, but their habitat is being destroyed by removing irreplaceable foliage that they depend on. The destruction of native habitat creates major holes in the koalas’ landscape.

A recent study from the University of Queensland revealed the importance of maintaining at least 30 percent of forest land to ensure the koala’s survival. Results point to the importance of the species’ access to wide landscapes, because habitat isolation can threaten genetic diversity which is necessary to conservation. Researchers found that genetic diversity “dropped rapidly” once the country’s amount of forest land fell under 30 percent.

The Australian government must take measures to increase the amount of forest land to save declining species, including koalas.

Demand that action be taken before any more irreversible damage is done to these wonderful creatures’ habitat and future generations. By signing this petition, you will help urge the Australian Minister for the Environment to adopt an environmental offset system that ensures protection for koalas.

The rapidly increasing rate of deforestation poses dire consequences for the conservation of koalas, and there is no adequate policy in place to ensure their survival. The current system , which simply allows deforestation and destruction of native habitat if the proposal includes a promise to offset the destruction by providing like habitat elsewhere, is destroying chances for koala bear conservation.

This system creates obstacles in the areas where koalas can roam for mating purposes.

It also does not ensure that they will even migrate to the new proposed habitat. Deforestation not only leads to loss of habitat, but also increased disturbance, injury, stress, and competition for food or territory due to overcrowding.

Creating more holes in koalas’ habitat can further harm their rapidly declining population. A recent study from the University of Queensland revealed the importance of avoiding habitat isolation because it can threaten genetic diversity, which is necessary to survival. Researchers found that genetic diversity in koala bears “dropped rapidly” once the amount of forest land fell under 30 percent. It is necessary to raise the amount of forest land to a level suitable level for the species’ conservation.